LS-F50G and Google Home Assistant Side By Side

Here’s the Sony and Google side by side. The Sony is physically larger and heavier than the Google original. Beauty is in the eyes of the beholder, personally I prefer the look of the Sony. It’s just sexier looker than the Google Home as the latter has too much plastic.

The Sony at 750 g is also 270 g heavier than Google Home at (477 g). Even though the speaker driver on the Sony is smaller (48 mm on the Sony vs 50.8mm on Google Home), the Sony’s second opposing driver is slightly larger at 53 mm with bass reflex port to boot.

But who are we kidding here? 5 cm is hardly a woofer, let alone a sub woofer

Like Google Home, Sony has two microphones are located at the top (two pin holes). The Sony microphones are placed directly on top while Google Home have them facing slightly forward on a slanted angle. Initially I thought this is going to be a problem for the Sony but experienced no issues so far. The Sony is as more than capable at intercepting my my voice commands when I’m using Google Assistant.

The following picture shows the speaker components of the Sony. Here you can see the bigger driver (sub woofer) is placed up top. A two stage diffuser sits between the two opposing drivers. The diffuser is asymmetric because the top driver only output lower frequencies (and thus it is shallower when compared to the bottom). This diffuser reflects the sound outwards, and is how you the sound is spread 360 degrees all round (omni directional). It works, do not expect MBL like audio quality here

The top sub woofer driver is housed in a small cylinder, with the bass reflex port. The port is also padded with some sponge/foam at the end. This tricks the driver into thinking it’s housed in a bigger box than it physically is. 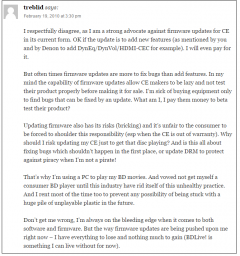