Virtualisation allows me to run multiple VMs in a single powerful computer. E.g. I can run 6 VMs (1 CPU 4 GB of RAM, and 2TB storage) on a single machine that has 32 GB RAM and say 16 TB of storage). The advantage of this are:

Proper development requires proper hardware. At the time Ryzen/Epyc from AMD are not released yet, Intel Xeon processors reign supreme. This is my Xeon server.

This server is running the following Virtual Machines (VM):

As you can see virtualisation allows me to run all the above (8 virtual machines) on a single machine. VM provides a lot of control and flexibility. I can create something called a Snapshot, which captures the state of the VM at the time, allowing me to make changes and then revert back to the snapshot state (think of this as a very powerful version of Microsoft Restore Points). This machine is in use since Snakeoil 0.1.4.

NB: I’m in two minds of turning this existing Xeon server into a NAS, and move development into a new AMD Ryzen or ThreadRipper with 64 GB of RAM running Proxmox. It’s more a “want” than a “need” right now. Perhaps in the future when I can afford to stay in a bigger house with more room. 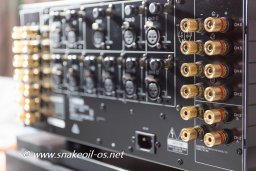