Here’s an interesting article that turned up in my inbox a few weeks back. Excerpts follow:

“It was no surprise, then, that in 1983, the magazine jumped at the opportunity to conduct a double-blind listening test, which editor-in-chief Bill Livingston and his colleagues hoped would reveal, scientifically, that high-end cables were indeed a hoax and provided no higher performance than the everyday lamp cord in common use at the time.”

“The resulting article created a firestorm. As you’ll read, the panel identified, to a statistically significant degree, the 24-gauge from the other two contenders with pink noise as the source. More critically, they also identified, again with statistical significance, the Monster Cable from the 16-gauge with pink noise. But the latter results didn’t hold when choral music was used, and none of the Monster versus 16-gauge results passed the higher threshold of a 75 percent or greater detection rate said to be psychoacoustically significant.”

“SR’s editors, however, rewrote the ending to create something akin to a blanket condemnation of the category and pressured Greenhill to accept the changes, a decision he later regretted.”

“Today, 35 years later, the debate over audiophile cables remains as active as ever.".

In other words. Folks have heard a difference between speaker cables. The article way back in 1983 should have settled this there and then. But something got into the way of the truth. You can read the Sound & Vision article in full here, and here is the article “The Horse’s Mouth” mentioned in the S&V article.

Here are some excerpts from Stereophile’s article - “The Horse’s Mouth“:

“The striking outcome is that the panel accurately heard and named speaker cables in 5 out of 6 comparisons. The listeners felt pleased after this listening test battery: they had heard real differences! After the 50 hours of testing, scoring, comparing, and just plain listening, they were exhausted but felt accomplished. Both Monster Cable and 24-gauge wire could be heard reliably under double-blind conditions.”

Much can be learned from the coverage afforded the cable article. Stereo Review has used Larry Greenhill’s article by distorting it to represent their well-established editorial positions. International Audio Review has used it to draw attention to its role as savior of the consumer and of the high-end industry. The Absolute Sound has capitalized on the humor possibilities, and taken the opportunity to again attack Julian Hirsch—at whose feet I feel this matter is unjustly laid. Hans Fantel, who must have read only the conclusions and not the data, used the Stereo Review article to justify his hitherto-announced scorn for esoterica. The Wall Street Journal seemingly has no axe to grind, but Gregory Sandow has used their pages to not unfairly promote The Absolute Sound, for whom he also writes.

Significant harm has been done, however.

The underlined paragraph indicates the same article are interpreted differently by subsequent magazines to push their agendas. Herein lies the problem (in bold) - these articles have done more harm than good.

And unfortunately we are hurting ourselves. People like to listen to people of power, and the people listened. The seeds of doubt have been planted and like weed they have overgrown and took over what could well be a perfect garden. The enjoyment of music should be taken seriously. This hobby is now seen as a joke for the public Joe.

I wonder how much a pair of well constructed, good sounding cables will be priced had everybody accepted that cables do make a difference? Audiophiles will be paying much less than what we are paying now. Ironically, specialist audio companies, the companies many laugh at will not exist if people simply take the time to notice that cables actually do sound different.

There is a difference between good sound (flat response, fancy charts/tables and so called science) and good music (the best creation by mankind). Hopefully in time I can show you what good music is, and one day you’d realised you  have wasted years chasing ‘good sound’ when you should have focused on good music all along. 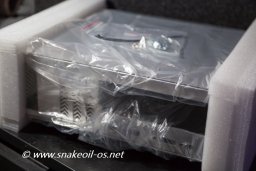