Difference between revisions of "Configuration/snakeoil"

This page is available in activated editions only.

This tab contains a lot of experimental (unstable) features yet to make it to the public domain. Only people with a activation code can unlock this functionality (more commonly known as beta testers).

These features can be highly unstable so please try them at your own risk.

How various programs are executed in Linux to give you that multi-tasking ability is determined by something call a process scheduler. How it all works is beyond the scope of this manual, because it largely dependent on the technique (plus other stuffs). Suffice to say if you are using a cooperative scheduler then you can use this option to fine-tune how often a process gets "looked at" in the queue. Snakeoil kernels with RT patches are all preemptive so this option is probably useless.

Click on the "Add Process" button to add a new process. In the process name field, enter the name (or part of) of the process you wish to reassign a new priority. The prio field is the new priority level you want this process to be set to (this field is numeric only, with 1 being lowest priority, and 99 being real-time). Note that we only adjust the priority level here and not the scheduler policy. The later is really reserved for advanced users and not for general use.

Kernel tweaks are parameters you can specify for the boot kernel. Changing these settings will alter the behaviour of the booted kernel, and that in turn can influence the sound. These settings are experimental and the system may fail to boot, or become unstable. Please try these settings at your own risk.

You can upload kernels to your Snakeoil machine. The last uploaded kernel is always set as the default boot kernel, use this setting to override that behaviour and use a previous kernel as your default.

The purpose of the clock source is to provide a timeline for the system that tells you where you are in time. For example issuing the command 'date' on a Linux system will eventually read the clock source to determine exactly what time it is. The clock source shall have as high resolution as possible, and the frequency shall be as stable and correct as possible as compared to a real-world wall clock. It should not move unpredictably back and forth in time or miss a few cycles here and there.

Some common clock sources are:

These are additional command line options for the kernel. Please note these options while well tested in Linux may not be compatible with your hardware configuration. If the kernel fails to boot you'd need to manually modify the boot up options from the console to recover.

Introduced in Blind Testing U7. This feature allows you to create a RAM disk to play music off it.

You can dedicate a portion of your RAM and convert it into a RAM drive if you have ample RAM available on your media PC. A RAM disk has no moving parts, so it's like an SSD, only faster. RAM is one of the lowest latency memory device on a PC. There could be a benefit in audio quality if music is played directly off a RAM disk. This will also be the shortest path (RAM → RAM → CPU → Audio Device) rather than SSD → RAM → CPU → Audio Device.

Playing music off a RAM disk cuts off any latency between SSD → RAM.

The amount of RAM free varies over time. For stabiliy reasons, it's best to assign a RAM disk that's well under the available free space. This frees up the RAM to act as cache which will speed up the speed of your entire operating system. Depending on your point of view - balancing the size of your RAM vs amount of RAM for caching is a tweaker's joy, or nightmare. In general limit the size of your RAM disk to one album (approx. 600 MB).

You have a choice of two RAM drive types - tmpfs vs ramfs.

tmpfs has more checks and balances. You'll never run out of memory with this type. If your system runs out of space, the Operating System will automatically swap out unused memory blocks into swap space. The upside is increased stability. The downside is memory swapping incurs a penalty and may result in lessor audio quality.

This is the more unstable version of a RAM disk. The Operating System will not swap out your memory. If you specify a size that's too big and the system has run out of RAM, the whole machine will freeze in ithe worst case scenerio. The upside is you are assured of the lowest possible latency in music playback. The downside is you got to really know what you're doing.

Use this to install/uninstall software easily. Uninstall anything you don't need to reduce clutter, or install new players as they come. 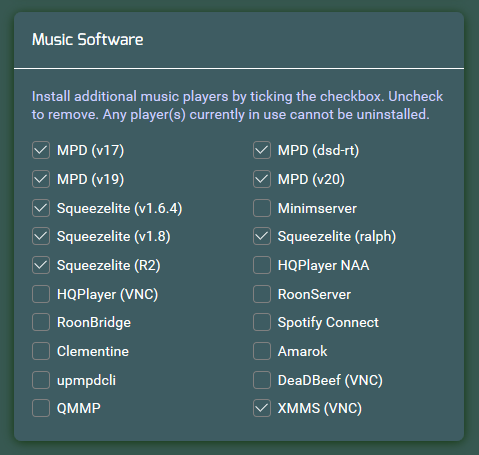 You have the choice to disable these services. Doing so will increase RAM, which may in turn yield benefits (or not).

You will not be able to gain access to your Linux OS when you disable both SSH and TTY. The only way is remote log in again is to enable either one from the web interface. You will be locked out of the system if you disable these two services and loose network connectivity.

You can install additional Ubuntu packages to expand the capabilities of your Snakeoil OS.

Processor affinity, or CPU pinning, enables the binding and unbinding of a process or a thread to a central processing unit (CPU) or a range of CPUs, so that the process or thread will execute only on the designated CPU or CPUs rather than any CPU. This can be viewed as a modification of the native central queue scheduling algorithm in a symmetric multiprocessing operating system. Each item in the queue has a tag indicating its kin processor. At the time of resource allocation, each task is allocated to its kin processor in preference to others.

Make your changes, and do not forget to hit the 'Save' button at the bottom of the page for all your changes to take effect.